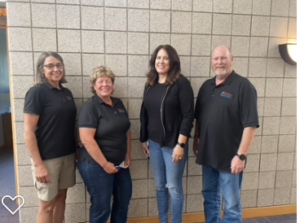 Kim Bejot- Affiliate Director:  Kim has served as Nebraska’s Affiliate Director since 2002 and has been on the NCAPS board since 1997.  She started as a Team Manager in 1994 and happily managed teams until 2009.  She has seen tremendous personal growth in DI kids (and the adults who come along for the ride)!  Kim loves the Destination Imagination program and is always excited to start a new DI year, empowering kids to succeed in life!

Beth Bogert-Beth is a teacher and coach at Potter Dix.  She has been a part of DI for over 20 years.  During that time, she has been a team manger, an appraiser, and a member of the NCAPS Board.  She has enjoyed watching her 4 children participate in DI.  Per Beth “I have been lucky enough to take 8 teams to Global Finals in the past 6 years.  As a teacher and a One Act Play Coach, I see the benefit of DI in the classroom and on stage.  The kids who have been in DI have an advantage because they can see things differently and see every challenge as an opportunity!”

Donna Robinson, Regional Director–Donna started out in the fall of 1990 as a Team Manager at a small rural school in Holdrege.  At the time, she was the school secretary and all 4 of her children had competed in the program all the way thru High School.  Along with her husband, Dennis, they managed teams for 13 years and advanced to Global Finals multiple times.  In 2003, Donna became an NCAPS Board Member and Regional Challenge Master.  Donna  and Dennis added Global Final Appraisers to their duties in 2013, and have been going every year since then. Currently, she is the Sandhills Affiliate Challenge Master for Engineering (Structure), and the Pin and T-shirt Director along with her Board duties. 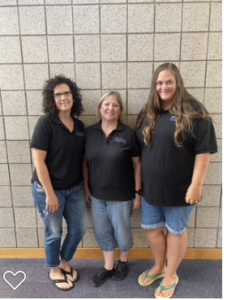 George Blessing–Hello!  My name is George and I’ve been involved with Nebraska DI since the fall of 1993 after I graduated from High School! Prior to graduating High School, I participated in the OM program and went to Global Finals twice at Conestoga High School.  I have been on the Nebraska NCAPS Board since DI became a program in 1999/2000, and have been a Regional & Affiliate Challenge Master since 2006.  My degree is in Electronics Engineering Technology from UNL, and I work as an IT Systems Administrator at the University of Nebraska.  And, whenever I have “spare time”, I work as a part-time Announcer / Sports Producer at Flood Broadcasting’s B-103 / Otoe County Country in Nebraska City. I have very much enjoyed my time and experience with the DI program – DI is very beneficial to our children and is a program I fully believe in!

Roxie Boschult–Roxie is a mother of 2 and grandmother of 6 and is an LPN.  She started as a Head Judge in the early 1990’s and then stepped up to Challenge Master for several years.  In the late 90’s served as a Regional Director to 2009.  Roxie came on the NCAPS Board in 2000 as a Board Member and has been the State Treasurer since 2011.

Alan Danforth – Alan started DI in 2007, when his daughter was in Jr. High.  Her team needed parents to be appraisers and he was assigned to Instant challenge.  Alan spent a few years helping on the Improvisational Challenge and Fine Arts Challenge.  For the last few years, Alan has been the Affiliate Challenge Master for the Improv challenge. He always enjoys watching the DI kids perform the skits and solving the “unknowns.”  Alan joined the NE DI Board in 2022.

Johanna Nielsen– Johanna is a teacher and coach at Cross County Community Schools. Her involvement with DI started with appraising in the Twin Rivers Region and has evolved into a position on the board. Johanna loves the collaborative environment and creative outlet that DI provides kids. Currently, Johanna serves as Affiliate Challenge Master for Instant Challenge and joined the board in 2021.  She is honored to be a part of such a unique organization!

Connie Powell-Regional Director–Connie has been a NE DI Board Member since 2011 and currently serves as Regional Director for Twin Rivers Region.  She is the DI Coordinator for Cross County Schools and is also a Team Manager.  Connie became involved in DI when her daughter was a team member in 2006.  After attending her first State Affiliate Finals, her passion was ignited and she’s managed teams since 2009.  Connie loves this program not only for what it does for kids but for what it gives them to take through their lives.  Connie has 2 children and is the grandmother of 2 boys.

Ashley Wittgow–Ashley started DI when she moved to a new school as a high school student, participating for 4 years.  During high school, she was also an Assistant Team Manager for an elementary team.  She also stepped up to being an Appraiser during college. In 2010, Ashley joined the NE DI Board of Directors and is currently the Director of Souvenirs and the Jar Raffle.  She enjoys getting to see many of the children while they visit the souvenir table. 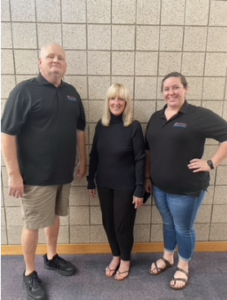 Lewis and Clark Regional Board

Pam Ashley – Pam enjoyed managing her daughters’ Destination Imagination teams for over ten years and then had the chance to work with another team of Blair middle schoolers.  The teams embraced opportunities to compete at DI Globals and present at a National Youth Leadership Council conference.  Pam loves the opportunities that DI offers to our youth to develop skills in teamwork, communication, creative problem solving and community activism.  She now serves as the Service Learning Challenge Master, at the regional and state levels, and joined the NCAPS Board of Directors in 2019.

Morgan Hansen-Morgan started DI when she was in 8th grade back in 2011. From then on, she fell in love with the dynamic changes of the challenges so she could always come up with a new ways to look at a problem.Morgan graduated in 2016 and continued from then on to represent as a Student Alumni for Columbus Public Schools by appraising from 2016 on. Morgan now finds watching new teams, new challenges and the joy and excitement of these kids who continue to work year after year.  Morgan joined the Board of Directors in 2022.

Steve Taylor-Steve became involved in Destination Imagination like most folks, when his child became involved. Steve started out in 1994-1995 as an assistant Coach/Team Manager for his daughter’s team. From there he moved on to Appraiser and then to Regional Challenge Master for the Denver Region in Colorado for about 15 years. Steve also served as an Affiliate Challenge Master for Colorado and finally as an International Challenge Master for the Engineering Challenge. In 2018 Steve retired and moved back to Nebraska where both he and his wife were born and raised. He wanted to stay involved with DI because of the life skills it helps to teach the young people of today. Steve became a Co-Challenge Master in 2019 and was invited to join the NCAPS Board in 2020. In 2021, Steve became the Affiliate Training Director.  Steve continues to enjoy what the program has done for the many kids he has seen participate, leave, and return to the Program as young adults and what they have accomplished in part due to the experiences and skills learned through Destination Imagination. It never ceases to amaze him as to what these kids can come up with to solve the Challenges when left to their own creative abilities.

Sue Jared Bauerly- Sue started with Creative Problemsolving in 1987 for Council Bluffs Community Schools as the district facilitator, in 1994 started programs for Lincoln Public Schools and in 2014 facilitated DI for Omaha Public Schools. Along the way, she has appraised at regional, state and worlds competitions and managed DI teams for five years. Her two sons, Michael and Kyle participated  from 1987 to1992. Currently, she is retired and joined the DI Board in 2020. Sue loves the creativity, team work, problem solving and thinking outside the box for DIers! Magnificent program for kids!

Alicia Wolles–Vice President-Alicia has been involved in Destination Imagination since 1999!  She has competed, appraised and served on the NCAPS Board.  Alicia has been a Regional Challenge Master and Affiliate Challenge Master for the scientific challenge since 2010 and currently, Vice President and Recording Secretary.  Per Alicia: “I chose to stay involved in DI because of what this organization has given me.  I know that I would not be the creative problem solver I am today without this organization.  This is my chance to give back and help future generations discover what they can become!”

Copyright/Trademark Declaration for Affiliate Use

The use of any Copyrighted or Trademarked art or logos without the written permission of the owner or organization on pins, shirts or merchandise is not sanctioned or condoned by   NCAPS-Nebraska Creative Association of Problem Solvers